“Music is not simply recorded there: it is created, explored, challenged, pushed to its limits, and finally captured there.” – Jasper D Wrinch (Discorder)

"Producer Felix Fung, who runs Little Red Sounds, is behind some of the most compelling music to come out of Vancouver in recent years." - Niki Hope (Vancouver Courier)

“Far from just producing records, the studio stands in as a community space and a place for musicians to explore and interact with one another.” – Jasper D Wrinch (Discorder) 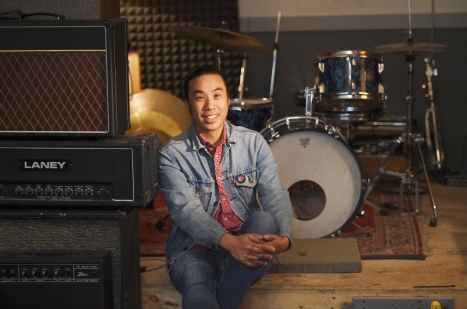 Fung, who runs Little Red Sounds, has his finger on the pulse of the local music scene

“You’re going to get addicted to this thing” were the last words Felix Fung ever heard from the guy at the music shop on Fraser Street where he bought a Gibson guitar and a four-track recorder more than 20 years ago.

The guy wasn’t talking about the guitar. He meant the recording device, and it might have been an omen of sorts because ever since Fung got his hot hands on it, he’s been obsessed with capturing the magic of sound.

“That [four-track] was the main instrument for us,” says Fung, who runs Little Red Sounds, where he’s produced the darlings of Vancouver’s indie-music scene: the Pretty’s, Girlfriends and Boyfriends, Les Chaussettes and the Ballantynes.

In the digital age, where music can be scrubbed clean of imperfections with the press of a button, Fung likes to keep it a little dirty. He follows the old masters who turned on the tape to capture the raw energy of live music.

“I don’t mess with it,” Fung says, describing his process. “At the same time, everyone who works here understands that we are trying to capture a moment rather than perfection.”

While he does some electronic music and layered singer-songwriter recordings, when Fung’s working with bands, he doesn’t overcook it.

“Everything you hear, done here, at the heart of it, there is three or four people making something happen in a room together,” Fung explains. “It’s a performance — it’s a connection between people.”

From the black-and-white pictures of Serge Gainsbourg and a young Ringo Starr, to the vintage amps and guitars that line a wall, the Hastings Street studio is the kind of space that makes you want to hang out and create.

Fung, wearing red denim pants, a worn-in Levi’s jacket, his hair pulled back in a pony, revealing short sideburns, reigns over it
with a quiet assurance.

What he wants is to create a space for musicians where they can shake off the outside world and feel like authentic artists, even if they have day jobs.

“I don’t want the cellphone warehouse manager to feel like the cellphone warehouse manager when they’re playing, and I don’t treat them that way,” Fung explains. “I don’t want to suggest that it’s a momentary dream. I want to show them that they can live this way forever and still take care of their rent. This is who I see them as. This is who they really are.”

Fung didn’t start playing seriously until his late teens, but loved music from a young age. He remembers being six years old driving around Richmond in the backseat of the family Cutlass while Juice Newton purred “Angel of the Morning” on AM radio. He sat captivated by the melody and the sentiment.

When he was 12, his dad bought him The Beatles 20 Greatest Hits record, which had a profound impact on Fung, who cites Mickie Most, Phil Spector, Willie Mitchell, George Martin, Tchad
Blake and Brian Eno as his influences.

Some of his favourite recordings — among many — are anything from the Beatles to Sun Records.

Leaning back on a red couch in his Little Red Sounds studio, Fungs reflects, “That’s all I’ve ever wanted, is to be part of that conversation.

I don’t need to stick out, but to jump into the river and flow with it and see where it goes.”